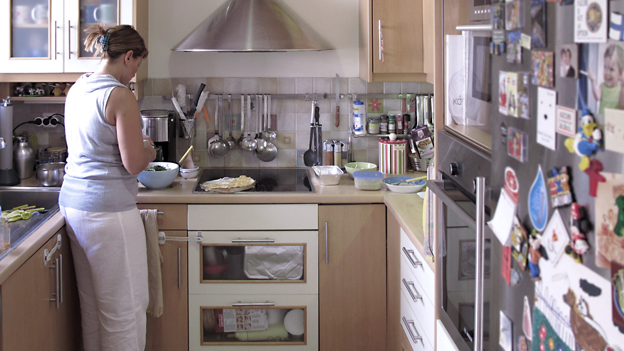 The traditional way of getting dinner is buy food and cook it, or to go to a restaurant. But what if someone in a nearby street has cooked more than they need and is ready to share it for a small fee? It’s already happening in the Greek capital and will soon be starting in London.

It’s time for Marilena Zachou to get up, make a Greek coffee, get the kids fed and off to school. And when the peace and quiet descends at 10am, the cooking begins. Today it is moussaka.

She gently fries the onion and minced lamb in olive oil. She reaches for the pepper, salt, paprika and tomatoes and inhales as the aroma fills the kitchen and escapes from the windows and out into the street.

She uploads details of the dish and watches the screen as people from the area order their portions.

There will be no wasted food in her household today. At least five other people in the Athens district of Marousi will be sharing her family’s evening meal. By midday the entire oven dish has been sold. She notes down the delivery addresses for later.

This morning ritual is not unique to Zachou. It is happening across Athens.

Office workers, students and busy parents are connecting online with local cooks – anybody who loves cooking and can do it well – who provide them with a meal for less than they would be likely to pay anywhere else. In Athens, the price is usually between three and four euros (£2.50 to £3.40).

“I just could never calculate the correct portion amounts for my family,” Zachou says. “We don’t have a dog or a cat. I was throwing away so much. I guess making too much food is embedded in my Greek genes.”

That was what led her to Cookisto, an online community of amateur cooks and hungry city dwellers.

She is now a Cookista, with a profile on the Cookisto website, and her meals are rated every day. Apparently her moussaka has “no excess oil, is always made with the highest quality products, and tastes just perfect”. She is, according to those who eat her food, not just a housewife, but a five-star chef.

The site has attracted 12,000 cooks in Athens in the last few months. What began as a master’s degree thesis (in the form of a business plan) for entrepreneurship student Michalis Gkontas has now become a reality in crisis-stricken Greece, and is due to launch in London next month.

“It is a win-win situation,” says the 26-year-old Gkontas. “The cooks get to earn a little extra, while foodies get nutritious home-cooked dishes for cheaper than if they were to get a takeaway.”

He is one of many young Greeks turning to the start-up scene following the rise of unemployment to a staggering 27.9%, and the rapid shrinkage of the once-bloated public sector – long the natural choice for many graduates.

For Zachou, the extra money she makes from Cookisto, about 200 euros (£168) a month, goes towards the supermarket shop.

“It’s not all about the money,” she says. “I feel we are pulling together in the crisis. Many students are struggling to make ends meet. I’ve been there… fed up of eating bread and takeaways. It’s nice I can provide them with food their mothers would cook and for very little.”

It’s all part of what Sydney-based innovation consultant Rachel Botsman calls the “revolution” of collaborative consumption, or the sharing economy. Since the global financial meltdown, “people have reverted to old market behaviours that involve trust – swapping, sharing, renting, bartering”, she says.

Cookisto joins the likes of Airbnb (bed and breakfast), Lyft (ride-sharing), Liquidspace (space rental) and Taskrabbit (deliveries and errands) – all occupiers of this online space where trust and online credibility is crucial to success. The reviews say it all.

“It’s what monkeys are born and bred to do, share and co-operate,” Botsman says. “These sites generate the social glue of trust between strangers. Ultimately, a shift is happening from institutional trust to peer trust.”

Office worker Dimitris Coustas buys at least one lunch from Cookisto most weeks.

“The cooks deliver the dishes to you themselves,” he says. “Sometimes they add a free dessert to encourage you to choose them again next time. It’s funny, sometimes the housewives will ask if you have ordered from anyone else on the site and enquire how their food rates compared to others’. I think there is quite a bit of competition!”

Cookisto has no way of monitoring the hygiene of the cooks’ kitchens or checking the freshness of ingredients, but it urges users to post truthful reviews.