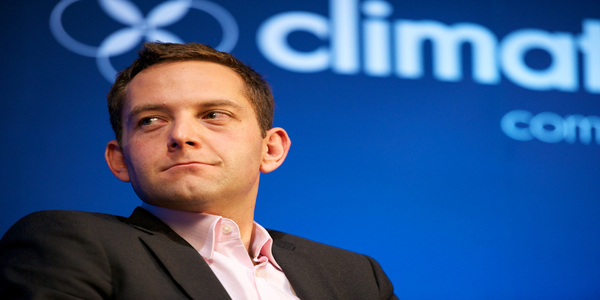 David Friedberg was driving home from his job at Google, stuck in traffic in the pouring rain. On the side of the road, he noticed a bike rental shop for tourists, shuttered early due to the weather. The next day, he saw the same thing, and the next — for a week. “It got to the point where I’m sure the guy who owned the place wasn’t even showing up — no one wants to ride bikes in the rain. And I thought to myself, that’s a pretty crappy business.”

But then he thought about it more. “It occurred to me that whether or not this guy was making money in a given month was based on how many days it rained. That’s actually a huge problem.” Digging a little deeper, Friedberg discovered that upwards of 70% of businesses are affected by the weather every year — a simple stat that gave birth to an idea: an insurance service for companies that would pay out when bad weather was on the way.

At the time, he didn’t know anything about the insurance — or really the weather, for that matter. But he founded the company anyway and called it Weatherbill. Last week, he sold it for $1 billion.

Today, it’s better known as The Climate Corporation, a service used by thousands of farmers across the country to protect their income against nasty weather — and the Valley’s most recent success story. But this victory was hard won. In fact, right before unveiling the company’s rebrand in 2011, Friedberg gave a Stanford Entrepreneurship Corner talk about exactly how hard it was, and what it taught him about entrepreneurship — all before he had glimpse of his eventual happy ending.

Never Say ‘I Want to Do a Startup

For Friedberg, anything worth doing has to start with a deserving problem. The desire to build companies isn’t enough to get you through the process.

“Saying you’re going to do a startup or you want to be a ‘serial entrepreneur’ has about as much meaning as saying ‘I’m going to jump off a plane.’ ”

“Why would you undertake any activity where you get your ass kicked every day, don’t get paid enough, and suffer through years of misery only to maybe find a problem worth solving?” he says.

The only reason to do this is if you feel passionate about changing the world in a meaningful way. You have to start with a problem that really impacts people’s lives and then present a solution they actually want. This is how he felt about Weatherbill.

Starting with the Bike Hut on the Embarcadero in San Francisco, Friedberg saw a country full of businesses big and small losing millions of dollars due to the weather. Beyond that, he saw livelihoods lost that could be protected by the right business model. That’s what kept him driving hard through the red tape, through years of poor market fit, through endless investor rejections.

Just look at the numbers, he says: “There’s a 0.00006% chance of building a company that will grow to be worth more than a billion dollars. Even if you do raise money and sell a company or take it public, your median time to doing that is probably 49 months. Assuming there are three founders, your median expected payoff would be $300,000 each — that’s the equivalent of $73,000 a year. And the probability of making nothing is 67%. So if your motivation for doing a startup is financial reward, you’re better off going to Google, a hedge fund, choosing a career with stable income potential.”

As you can tell, Friedberg is somewhat of a numbers guy. And in his work, he’s all about finding the data he needs to get the job done. In order to learn everything you need to know — in order to survive tough break after tough break — you have to be committed to a long view of success. In his case, that’s also how you win at a business you started off knowing nothing about.