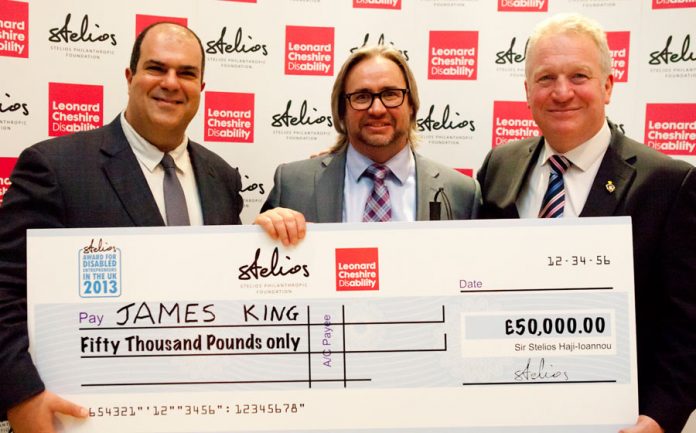 A disabled businessman from Milton Keynes has won the prestigious Stelios Award for Disabled Entrepreneurs 2013.

James, 47, is registered blind and also has dyslexia. He has seen off tough competition to win this year, having made it to the top three last year and narrowly missing out on the top spot.

James and his team design and build garden room extensions, which have tiled roofs. Unlike a traditional conservatory, the rooms are warm in winter and cool in summer.

But the journey to a growing, healthy business has not been a walk in the park for James. In his early 20s he began his career as a bricklayer in the construction industry. It wasn’t until later that he was diagnosed with Retinitis Pigmentosa, a hereditary eye condition which affects the retina. James had to give up bricklaying and work around his disability, so he moved into contracting. However, as his vision deteriorated James decided he must change direction. It was during this difficult time that the idea to set up a company making ‘garden rooms’ came to him.

He set up Oliver James Garden Rooms and began trading in 2011. Now with a workforce of seven and a turnover of almost £300,000, James works with homeowners across Buckinghamshire, Bedfordshire, Northamptonshire and Hertfordshire.

Winning the Stelios Award for Disabled Entrepreneurs means he will be able to go ahead with plans to expand his client base to new areas of the country.

Stelios Award for Disabled Entrepreneurs in the UK 2013 – the finalists