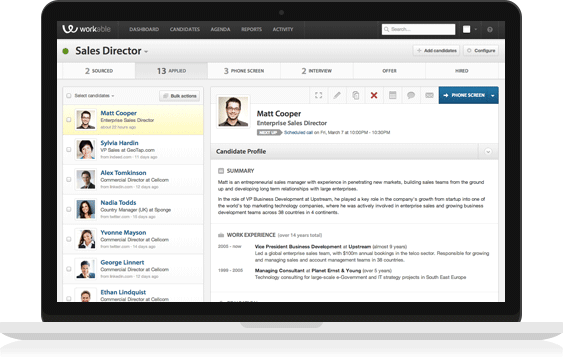 Workable, a startup founded in Athens, Greece, that has developed a cloud-based recruitment platform for SMEs, has today confirmed a new investment of $1.5 million led by Greylock IL, the Israel/UK-based affiliate of Greylock Partners, an early investor in LinkedIn which now counts LinkedIn co-founder Reid Hoffman as a partner. Previously, Workable had raised some $950,000 from individuals and the Greek seed investors Openfund, with the latter also participating in this round.

Although Workable is based in Greece, co-founder Nikos Moraitakis tells me that the majority — over 60% — of its 300 customers are in the U.S., and so that is where a lot of the focus of investment will be going forward. “The U.S. is the biggest opportunity for us,” he says. “Even without trying we are getting the most customers there.”

He says that Workable had other VCs approach it, and it is intentionally keeping this round low as it prepares to raise a bigger round shortly in the future.

Workable’s revenues are currently growing at a rate of 30% month-on-month, with that figure largely being reflected in its customer growth, to

Challenges and Opportunities of the U.S. Incoming Tourism and Investment for Greece. Building a Stronger...