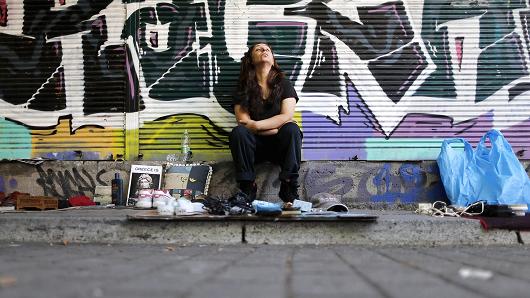 Young entrepreneurs here say they have little stake in the political and ideological debate, but are willing to embrace the realities that come with the policies being imposed by Greece’s creditors, including an end to a hodgepodge of regulations, protectionism, tax breaks and special-interest provisions that have long impeded the country’s competitiveness.

“Our customers are not Greek companies, so the success of our project does not depend on Greece at all,” said Stefanos Vasdekis, 35, one of the two founding partners of Travelmyth. “It’s how competitive we will be in a worldwide environment.”

With a youth unemployment rate around 50 percent, Greece presents its young people with a stark choice: emigrate and join a brain drain to Western Europe and beyond, or stay in their homeland and struggle against long odds to find a livelihood. The country’s recession-battered traditional industries have little to offer, so for many young people, the coveted prize has become a government job, obtained through the sponsorship of a political party.

But some are trying to draw instead on the country’s mercantile roots to build businesses of their own, despite all the impediments.

At least a half-dozen small-business incubators and co-working spaces — buildings where entrepreneurs can rent space cheaply and benefit from proximity to one another — have sprung up in Athens, nurturing new companies with up to about 20 employees.

A number of philanthropic organizations have sponsored contests and awarded seed money to young Greek entrepreneurs. Among them is the Hellenic Initiative, a nonprofit that receives support from Greeks abroad.

The Hellenic Initiative held a venture fair in June at which 19 start-up and established Greek companies made presentations to international investors, seeking capital and connections. The hopefuls included a cosmetics safety lab, a maker of custom folding bicycles and an eBay-like website auctioning fuel oil for ships. Investors came to the fair from across Europe, the United States and Australia.

Realistically, Greece’s problems are too big for one still relatively small sector to solve on its own. But, some experts say, it can lead the way.

“There’s a divide between the old school and the new,” said Jeremy Downward, the chief investment officer for Alpheus Advisors, an investment firm. He was also a founding partner in Greece’s first investment bank, Alpha Finance, from 1989 to 2001.

“Of course a lot of these ideas will fall by the wayside,” Mr. Downward said. “But I really believe that there will be a handful of innovative ones that do well. There is no shortage of really smart kids, driven kids, with a lot of zeal, a lot of drive, a lot of hunger and a pretty good business plan.”

One incubator for new Greek businesses was set up by the government of the Netherlands — a noteworthy twist, given that the Dutch finance minister, Jeroen Dijsselbloem, has become a figure of dread in Greece for driving a hard bargain in the debt-crisis negotiations. The Netherlands Embassy, working with local foundations and with Dutch companies like Heineken that have a substantial stake in Greece, created the incubator, known as the Orange Grove, in downtown Athens.

Even at 7 on Friday evening, the place was a hive of activity, as a dozen young men and women worked at laptops or conducted conferences in the industrial-style ground-floor space. They seemed to be ignoring the vending machine stocked with Heineken beer in favor of water and freshly brewed coffee. Stacked on coffee tables were pamphlets and business cards for enterprises like Bloode, which describes itself as an online blood donation service.

Young businesses have been moving lately into old industrial buildings in the Gazi neighborhood. In a co-working space there called Found.ation, five entrepreneurs in their 20s (not including one partner now doing mandatory Army service) operate a youth-oriented marketing network called Hangover Media.

One of their more successful ventures so far is Neolaia.gr, a website featuring entertainment and job listings, and even an anger test. The site is supported by “native advertising” — sponsored articles and features that the Hangover team writes for companies trying to reach a youth market.

Once they get started, the young entrepreneurs face the challenge of scaling their businesses up to a meaningful size that might start employing more than a tiny handful of people.

“Talking about the crisis, and talking about all the negative aspects of this huge economic depression in this country, doesn’t help that much,” said Dimitris G. Kalavros-Gousiou, a co-founder of Found.ation. “It helps if you can start building something that makes sense, and makes sense both for business and for society.”

Though they would welcome a financial helping hand from the government, young entrepreneurs say that they have learned not to expect one. But seed money has started to flow from private sources, and in some cases from European Union programs.

George Tziralis, 33, an engineer, got into the seed-capital business five years ago when he and a partner founded Openfund, which invests in high-tech companies that originate in Greece but are aimed at international markets. The fund has since grown to five partners managing 15 million euros ($16 million).

Among its recent investments are Taxibeat, an Uber-like ride-hailing application that has become popular in Greece, and Workable, an employee recruitment tool now used by more than 2,000 small and medium-sized companies in 39 countries.

“We’ve demonstrated that some pretty good and interesting companies can come out of, let’s say, an exotic start-up location like Greece,” Mr. Tziralis said. “We get the best part of what exists here, without worrying about the worst part.”

One of the best parts is an educated, eager labor force that, because of the hard economic times, is relatively inexpensive to employ. “Greek salaries are much lower than in other European countries, and Greek workers have more loyalty to start-ups,” Mr. Tziralis said.

For Internet entrepreneurs like Mr. Vasdekis of Travelmyth and his partner, John Nousis, also 35, a willingness to embrace change comes naturally. They say Greece can no longer count on prosperity flowing from the country’s old mainstays — shipping, olive oil, cheese and traditional tourism.

The two men started their first company as college freshmen in 1998, and have averaged a new project about every other year since then. Some have succeeded and some have not, but through it all they have made enough to support themselves while reinvesting in their business.

Travelmyth operates almost entirely online; its founders keep an office in an incubator space, but its fluctuating staff of five to 15 employees telecommute. But there remain some bureaucratic trammels that the owners, to their dismay, must face the old-fashioned way.

“I feel sick every time I have to go by the tax office,” Mr. Vasdekis said. “Really, really sick.”